This holiday was all about urban exploration, or haikyo—which in Japanese means ‘ruins’. This may seem insensitive, considering that the north of Japan is indeed currently in ruins, but that’s not what this blog is about. Before the earthquake and resulting tsunami hit, the plan was to head north and explore some abandoned mines, love hotels and other interesting places, but that trip was scrapped in favour of Osaka and Japan’s south.

Why go to do Japan to do this? Well, Japan seems to build a lot of cool stuff and then just pack up and leave when business isn’t going so well. We also figured that Japanese security guards probably wouldn’t shoot us in the head if we were caught, unlike say Russia. Japan also has karaoke … oh yes it does!

Okay, now on with the show. Where to start? Well, let me give you a quick rundown of the motley bunch of characters on the trip:

Will I reference these people again in this write-up? Maybe, or maybe not—we will see how it goes.

So we left Australia on the 16th of April, bright-eyed and bushy-tailed. I’m not sure what that means, but I like it. We flew into the Gold Coast and switched planes … and waited on the runaway … and waited. One hour later, we got the call that the shitter was broken so we would need to get off the plane. I was happy to go into a plastic bag on the flight, but apparently that is ‘unsanitary’.

We got off the plane and were told that there were no other flights to Japan that night, so we would be put up in a hotel and fly out the next morning. I tried to do some wheeling and dealing, but no other airlines were flying to Japan, so we were stuck in Queensland for the night. They did put us up in nice hotel that had three swimming pools and some decent rooms. One of the swimming pools had a grotto under the waterfall and I could only imagine the amount of semen that had been shot out in that place. It made the grotto a less-than-relaxing place to sit and cool down.

Anyway, the next morning we were out of there and our journey continued to Japan. We arrived at Kansai International Airport at about 8pm and only a day late. The first thing we did was slam some Real Gold. For those of you not in the know, Real Gold is a Japanese energy drink containing royal jelly. And, as scientists have confirmed, that this is the best jelly of them all.

Feeling refreshed and loaded with B-vitamins, it was time to head off for our first haikyo: Nara Dreamland. I used to work around Nara, but never really knew that there was a giant abandoned amusement park just behind the city. Well, I had heard about it but thought it was just one of the many shitty little abandoned parks Japan has scattered around its mountainous land. Little did I know …

We left the airport and journeyed through Osaka, stopping only to smash some curries at Coco Ichibanya curry house, and then on to Nara. Now, the first thing we learnt is that when breaking into an abandoned theme park, it’s maybe best not to slam a spicy curry before entering. We got to Nara around 11pm and decided to sing some karaoke and drink some beer to take the edge off. Nerves were a constant problem in the lead up, as we had heard security come and go during the night; so we would have to be quiet and try and hide whenever we saw anyone. So the idea was to calm the nerves but not to get blotto. Sometimes it’s a thin line to walk.

We finished a great session of karaoke at 1am, and then went and got snacks before changing into our cold weather/ninja gear. A lot of Soy Joy bars and Calorie Mates were purchased, and our backpacks were now safely tucked away in lockers at the train station. We kept our gear to a minimum and headed for Dreamland. We were black and stealthy … well, apparently not that stealthy, as my damn shoes kept squeaking. This was an ongoing problem during the night. I had never really noticed before, but they were loud as hell on a quiet night.

The walk to Dreamland was about 30 minutes from the train station. On the way there, we passed something that looked like a car accident and a couple of Japanese police officers were out taking statements. It was just passing 1:30am, but they didn’t really give us a second look. There is a hostel around the same area, so I guess a group of westerners coming in late wasn’t unusual. We headed to the back entrance of Dreamland. It was dark and lit by only the fading light of some unloved street lights. One street light was flashing on and off, and with each flash on I kept seeing the girl from The Ring and the girl from The Grudge holding hands like the twins from The Shining. Is that enough movie references?

We got to the back gate of Dreamland: a big fence, followed by a smaller barbwire fence. The fences were fairly easy to climb over, with the only obstacle being some nervousness over the whole thing. We ducked low while running over the bridge, and we were now in Dreamland!

It was 2am and the night had a beautiful full moon to light our way. It’s surprising how much you can see when there is just a full moon and no lamp posts. We started walking closer to the attractions when we suddenly heard the sounds of a motorbike/scooter type thing. Like well-trained soldiers, we all dove into bushes. Unfortunately, that didn’t happen at all. We all just kind of stood there in a stupor. It looked to me like the headlight of the bike was slowly coming around the corner and would be on us any second. We finally got our legs working and ducked into another section where we couldn’t be spotted too easily.

Fortunately, there was no bike and the light and sound appeared to be playing tricks on us. The bike my have still been in the park, but at this point we confirmed that it probably wasn’t near us and slowly continued on our way. Our keen army sense continued with all of us accidentally stepping on broken glass, pipes and branches. Anything that could make a noise, we stepped on it and then stepped on it again. Special Forces this was not.

Its kind of hard to describe what it was like being in Nara Dreamland. Everything creaked and groaned in the wind. Crows flew through the night sky. Flag poles banged. Doors closed right before my eyes … due to the wind … perhaps? We heard the sounds of a girl talking. Maybe it was someone else in the park with us, or maybe just voices carried on the wind from the town below. The voices were pretty clear though, and if it was on the wind it was damn strong wind. It was all unnerving and made edging around each corner fun and made the night fly by. The idea was to spend the night in the park so we could take photos in the morning, but we were all too excited to sleep and wanted to go explore.

Probably the coolest thing in the park was a nearly-perfect condition monorail still parked at the station. The owners of the park were nice enough to leave the door open to the monorail, so we jumped in and played monorail driver. ‘All aboard’ wasn’t said once, but was always implied.

We heard something like a gate being opened and closed, which made our hearts jump, but the monorail station also provided a nice high vantage point to view the park from. Unfortunately, the monorail didn’t work but we pressed most of the buttons in an attempt to get some juice flowing into it. Not sure what we would have done if it had actually started up again other than shit our pants, but that kind of brings me back to the curry situation. Don’t eat curry and go into an abandoned place. It brings unnecessary problems.

We stopped and sat quietly about six or seven times throughout the night, convinced that security was about to jump out and get us. Each time we started walking again, it felt like they were somehow tracking our every movement like the Predator or something. So we went into the castle, the jungle ride, the haunted house of aliens (which is a bit creepy in the pitch black at night, but doesn’t look so bad from the pictures), the train station, the hall of mirrors, the two roller-coasters and the Sealand part of the park with huge water slides. It was all still there and looked like it was ready to be started up again the next morning. The arcade was even still filled with games, including a rather new looking ‘Dance Revolution 2000 Machine’.

Perhaps the spookiest feature of the park is the entrance and main street – an American themed, tree lined street that looked like something out of an old movie. The trees were leafless and overgrown, making them look rather haunting when silhouetted against the moonlit sky. Many of the shop front windows had been smashed and a line of caution tape now ran across many of the buildings. This made us feel like we were at a crime scene … in a rather tacky, camp town.

We wandered around the park for about four hours before the sun started to come up, and then it was crazy camera super happy fun time. All bets were off and our poorly-performing, but still intact, army unit split up and started to get more confident running off to take photos of different sections. We were still mostly in view of each other, but not in the tight noisy formation we normally had.

At about 6am, I was taking photos of the castle when I turned to see three members of our team, but not a fourth. I could hear footsteps moving quickly on the other side of the castle, and assumed it was the fourth member of our team. Continuing to take photos, I then saw out of the corner of my eye the fourth member—and he wasn’t on the other side of the castle! Security were here and they were shuffling around what seemed to be quickly and slowly at the same time. The sound of their feet seemed quick but the speed which they were coming around the castle seemed agonisingly slow. It was very strange. I quickly backed out of my side of the castle (which was facing the exit) and collected the other guys, and we ran for it.

We exited quickly up and over both fences and we were back on the street in no time. Some people were up walking their dogs at this time in the morning and gave us the old stink eye, but that was fine. We circled around to the front of the park to see if we could spot security, and we saw a car parked where there was no car parked before.

So ends the adventure in Nara Dreamland. 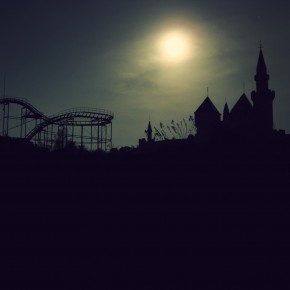 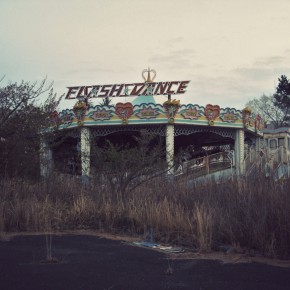 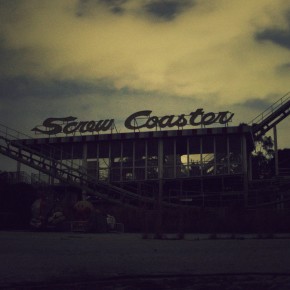 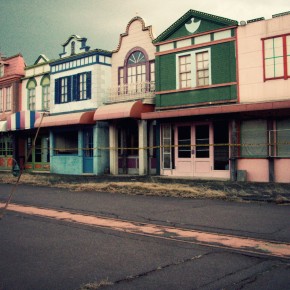 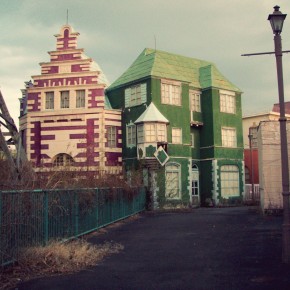 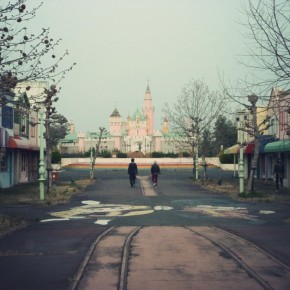 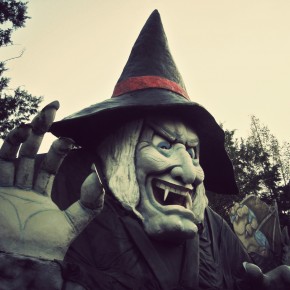 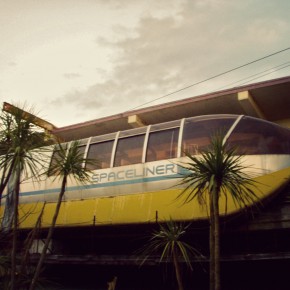 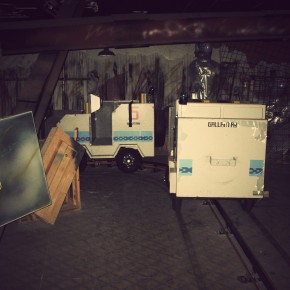 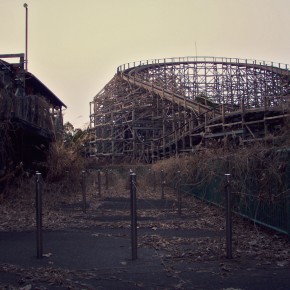 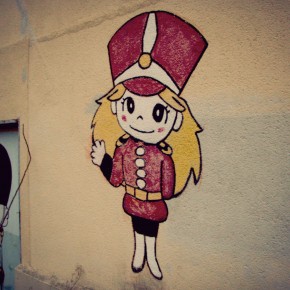 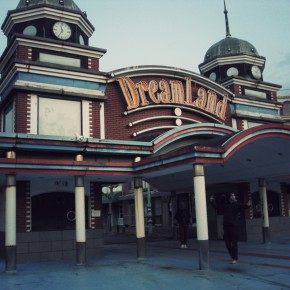 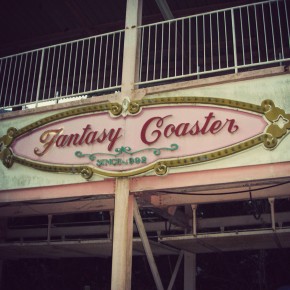 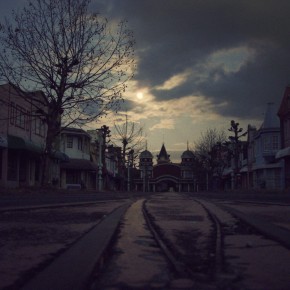 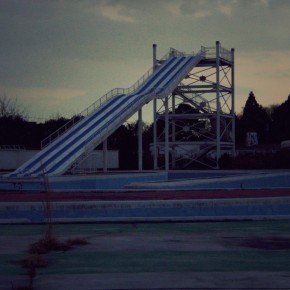 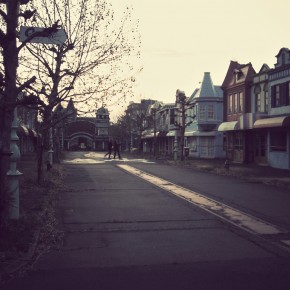 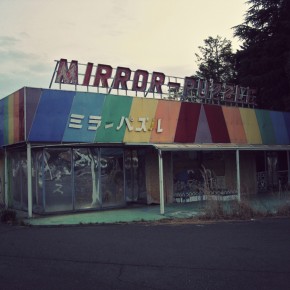 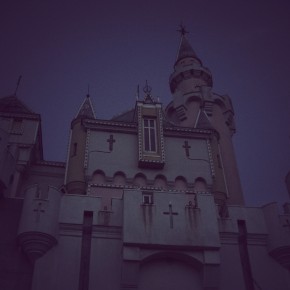 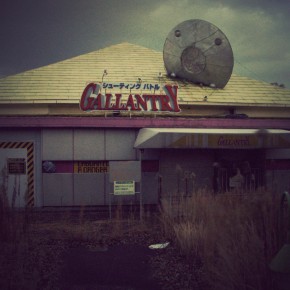 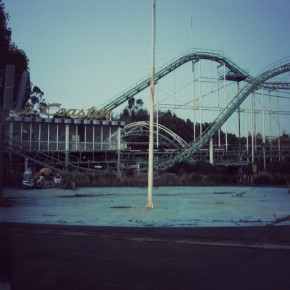 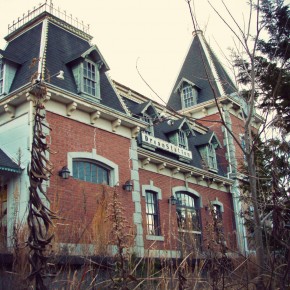 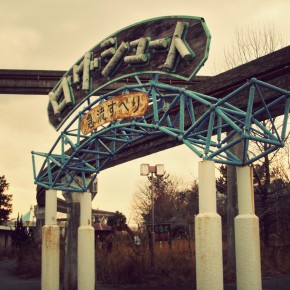 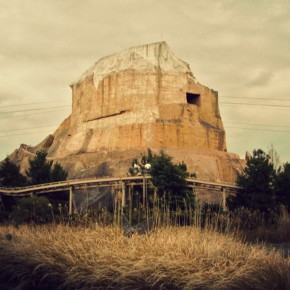